Guess What? It Turns Out That J.P. Morgan Chase Suspected Madoff Tomfoolery Ten Months Before The Ponzi Scheme Blew Up 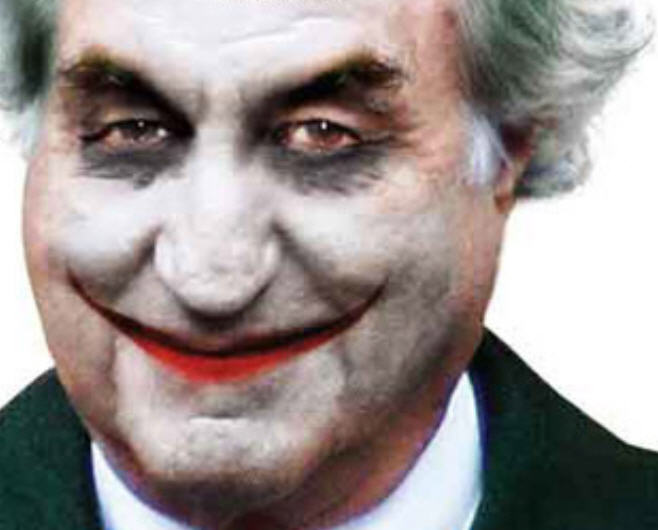 Senior executives at JPMorgan Chase expressed serious doubts about the legitimacy of Bernard L. Madoff’s investment business more than 18 months before his Ponzi schemecollapsed but continued to do business with him, according to internal bank documents made public in a lawsuit that was unsealed on Thursday.

On June 15, 2007, an obviously high-level risk management officer for Chase’s investment bank sent a lunchtime e-mail to colleagues to report that another bank executive “just told me that there is a well-known cloud over the head of Madoff and that his returns are speculated to be part of a ponzi scheme.”

Even before that, a top private banking executive had been consistently steering clients away from investments linked to Mr. Madoff because his “Oz-like signals” were “too difficult to ignore.” And the first Chase risk analyst to look at a Madoff feeder fund, in February 2006, reported to his superiors that its returns did not make sense because it did far better than the securities that were supposedly in its portfolio.

Despite those suspicions and many more, the bank allowed Mr. Madoff to move billions of dollars of investors’ cash in and out of his Chase bank accounts right up until the day of his arrest in December 2008 — although by then, the bank had withdrawn all but $35 million of the $276 million it had invested in Madoff-linked hedge funds , according to the litigation.

The lawsuit against the bank was filed under seal on Dec. 2 by Irving H. Picard, the bankruptcy trustee gathering assets for Mr. Madoff’s victims. At that time, David J. Sheehan, the trustee’s lawyer, bluntly asserted that Mr. Madoff “would not have been able to commit this massive Ponzi scheme without this bank.”

But with the case under seal, there was no way to gauge the documentation on which the trustee based his $6.4 billion in claims against the bank — until now.

The bank and the trustee mutually agreed to unseal the complaint. The lawsuit is one of hundreds the trustee has filed to recover assets for the victims of the Ponzi scheme. To date, the trustee has collected about $10 billion through settlements and asset sales.

In a statement released Thursday, a Chase spokeswoman said the trustee’s complaint was “based on distortions of both the relevant facts and the governing law. Contrary to the trustee’s allegation, JPMorgan did not know about or in any way become a party to the fraud orchestrated by Bernard Madoff.”

The statement continued: “Madoff’s firm was not an important or significant customer in the context of JPMorgan’s commercial banking business, and the revenues earned from Madoff’s bank account were modest and entirely consistent with conventional market rates and fees.” The trustee’s claims that the bank earned extraordinary sums from its Madoff relationship “is demonstrably false,” the statement continued.

“At all times, JPMorgan complied fully with all laws and regulations governing bank accounts, including the regulations invoked by the trustee,” the statement concluded. “In arguing otherwise, the trustee has misstated both the facts that JPMorgan has presented to him and the requirements imposed by federal law.” It added: “JPMorgan intends to defend itself vigorously against the unfounded claims brought by the trustee.”

Although lawyers redacted the names and specific positions of bank executives involved the incidents described in the lawsuit, other information in the complaint makes it clear that many of them held prominent positions.

Deborah Renner, one of the Madoff trustee’s lawyers with Baker & Hostetler, reinforced that impression in a statement released Thursday. Ms. Renner said, “Incredibly, the bank’s top executives were warned in blunt terms about speculation that Madoff was running a Ponzi scheme, yet the bank appears to have been concerned only with protecting its own investments.” One discussion of the bank’s “due diligence” on Mr. Madoff was aired on June 15, 2007, at a meeting of the bank’s Hedge Fund Underwriting Committee. According to the complaint, that committee was “comprised of senior business heads and bankers, including individuals such as the chief risk officer and the heads of equities, syndicated leveraged finance, sales, and hedge funds.”

News accounts identified the chief risk officer for Chase’s investment bank in June 2007 as John R. Hogan, who is currently a member of the bank’s executive committee.

According to the complaint, the purpose of the Hedge Fund Underwriting Committee “was to ensure all senior partners who dealt with hedge funds were comfortable with proposals relating to hedge funds.”

The newly public material offers the clearest picture yet of the long and complex relationship between Mr. Madoff and the global institution that served as his primary bank since 1986.

What emerges is a sketch of an internal tug of war. One group of senior Chase bankers was pursuing profitable credit and derivatives deals with Mr. Madoff and his big feeder-fund investors, the hedge funds that invested their clients’ money exclusively with him. Another group was arguing against doing any more big-ticket “trust me” deals with a man whose business was too opaque and whose investment returns were too implausible.

For much of 2007, the tide was with the Chase bankers designing and selling complex derivatives linked to various Madoff feeder funds. By June of that year, they already had sold at least $130 million worth of the notes to investors.

On June 15, 2007, they asked the Hedge Fund Underwriting Committee to approve proposals that would have pushed that total to $1.32 billion, the lawsuit asserted.

But the committee agreed to increase the bank’s exposure to Mr. Madoff only to $250 million. And by 2008, the lawsuit asserted, the bank was giving more weight to the warnings from its risk management executives, who were increasingly concerned by reports from the “due diligence” teams visiting major Madoff feeder funds.

The feeder funds’ managers seemed “very defensive and almost scared of Madoff,” one risk analyst reported to his superiors. “They seem unwilling to ask him any difficult questions.”

After Mr. Madoff’s arrest, the complaint said, a bank employee referred to the underwriting committee’s agenda for June 2007 in a later document, saying: “Perhaps best this never sees the light of day again!!”

On the sidelines in this shoving match between the derivatives sales force and the risk management unit, according to the lawsuit, were the retail bankers who were actually responsible for monitoring the daily activity in Mr. Madoff’s bank accounts — activity that bore no resemblance to the normal patterns of a brokerage house or investment management firm, according to the trustee’s claims.

Even after it had begun to act on its suspicions about Mr. Madoff, Chase did not freeze his bank accounts or alert his regulators — or its own — to the unusual patterns in those accounts, the trustee’s complaint contended. As a result, investors continued to pour their money into Mr. Madoff’s Ponzi scheme until the last moment.

The bank “had only to glance at the bizarre activity” in the Madoff accounts “to realize that Madoff was not operating a legitimate business,” the trustee asserted in the litigation. The money coming in was not from the sale of securities, and the money going out was not for the purchase of securities — at a time when Mr. Madoff was supposedly making billions of dollars in trades as part of his investment strategy.

Indeed, the activity in the Madoff accounts was sharply at odds with his firm’s regulatory filings, which his “relationship managers” at the bank kept in their files and supposedly examined. For example, the Madoff firm’s financial reports listed just over $4.8 million in “cash on hand” in December 2006, although the ending balance in Mr. Madoff’s account at Chase that month was actually $295.4 million.

The trustee’s lawsuit against the bank says that the door to Chase was opened for Mr. Madoff by one of his longtime investors, a longtime Chase customer who is not identified in the complaint.

According to the trustee, the flow of money just between the Madoff accounts and this customers accounts should have set off warning bells at the bank.

The trustee’s complaint does not speculate about the purpose of the transactions. Mr. Madoff had considerable discretion over some of his clients’ accounts, and may have been on both sides of those curious transfers.

The transfers should have caused the bank’s money laundering software to start flashing, the trustee’s complaint asserted, but that almost never happened and the bank never reported any suspicious behavior in the Madoff accounts to its regulators.

Mr. Madoff needed a bank that would allow him to move large sums of money through his account on a daily basis without “asking questions designed to uncover suspicious activity,” the trustee asserted in the 114-page lawsuit. His requirements were met by Chase, the trustee claimed.

The bank has vowed to vigorously defend against the accusations.