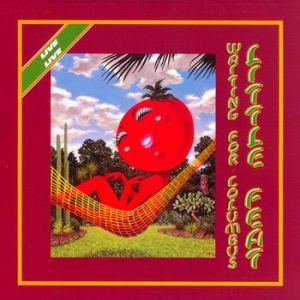 Well, Phish fans, we were all wrong.

At least the five dozen of us who ventured guesses about which musical “mask” the Vermont jam band would don for Halloween, in response to guitarist Trey Anastasio’s recent comments to Pop & Hiss about what this year’s choice might be.

Turns out, for those who don’t know already, it was Little Feat’s “Waiting for Columbus,” the  L.A.-based, Southern-rooted group’s 1978 double live album.

Pop & Hiss readers who weighed in leaned heavily toward something from Led Zeppelin, Frank Zappa or Jimi Hendrix, after Anastasio told me a few weeks ago, without revealing the title, that “this year, this one’s for me.”

“The one we picked, I’m going to get more out of this as a musician than I ever have before,” he said. “Three songs into it, I called everybody and told them, ‘None of the other ones — I wouldn’t think, hopefully — will have nearly the effect on my playing this one’s going to.’ ”

In the Phishbill program distributed to those attending the band’s performance over the weeknd in Atlantic City, N.J., Anastasio took that comment a step further, telling writer David Fricke, “We may have learned more from Little Feat than any other band.”

I’d had an impression it might be “Layla” by Derek and the Dominos, and with the Southern rock and blues that run through that double album, I like to think I wasn’t way off the mark. For those interested in the full set list, here’s a link to the JamBands.com site with more details.

To the reader who signed his name as Captain zoots, a consolation prize is in order for guessing the right band, wrong album with “Little Feat — ‘Time Loves a Hero.’ ”

But to Aaron, who wrote, “I think something recent is in order; who even remembers Little Feet?”[sic]

For all those who pined for albums by Zeppelin, Lady Gaga, Genesis, Bruce Springsteen, MGMT, Pink Floyd, My Bloody Valentine, Kriss Kross, David Bowie, Radiohead, NWA, Roger Waters or the Minutemen? It’s never too early to start campaigning for 2011.