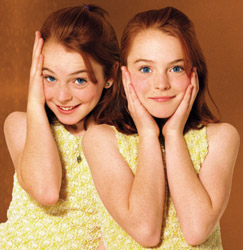 Lindsay Lohan will spend 30 days behind bars and will not be released early.

Superior Court Judge Elden Fox ordered Lohan to be held in jail –without bail — until an October 22 probation hearing.

After the hearing, which lasted less than ten minutes, the 24 year old actress was put into an unmarked squad car, surrounded by a police escort, and then taken to the Century Regional Detention Center in Lynwood — the same facility where she spent time behind bars earlier this summer. She arrived a short time later. Sheets were held up around her to shield her from the media’s glare.

This is her third time behind bars at the same lockup. Her previous stays at the women’s jail near downtown Los Angeles lasted 84 minutes, and 14 days.

According to L.A. County Sheriff’s spokesman Steve Whitmore, Lohan will spend the entire 30 days behind bars and will not be released early unless Judge Fox changes his order.

It was the “Mean Girls” star’s first appearance before Fox who had threatened he would sentence her to a month in jail for each drug test she missed or failed.

According to witnesses she appeared stunned as the judge announced his decision.

Judge Fox set a formal probation violation hearing for October 22nd during which she will find out her sentence for failing two court-ordered drug tests. Fox could order her to to spend more time behind bars, order her to rehab or release her.

“I think your client would rather have it on October 22,” Fox said giving the first hint that he intended to send the actress to jail.”

Holley rose to argue that bail should be set, but Fox refused.

“Oh God,” Michael Lohan said as bailiffs moved in and his daughter was handcuffed.

After the brief hearing, Michael Lohan told reporters that he believes his daughter should go to rehab and not jail.

“Jail is not good for anyone. I’ve been there. It doesn’t rehabilitate,” Lohan said.

Lohan also said that his daughter was “hanging out with the wrong people” and “making the wrong decisions.” He added that a few people keep “leading her down the wrong path.”

The starlet tested positive for cocaine at a random drug screening two weeks ago. She also failed a second random test which showed amphetamines in her system, according to TMZ.com.

Lohan admitted the “setback” September 17 on her Twitter feed and said she was “ready to face the consequences.”

“Regrettably, I did in fact fail my most recent drug test and if I am asked, I am prepared to appear before Judge Fox next week as a result,” she wrote.

“This is certainly a setback for me but I am taking responsibility for my actions and I’m prepared to face the consequences,” she wrote a few minutes later.

US Weekly is reporting that Lohan actually tweeted her confession while she was drinking “Jack and Cokes” at the popular Hollywood eatery “Magnolia.”

Lohan told People.com that she was scared that she might have to go back to jail.

Lohan was released from inpatient rehab on August 24th after spending 22 days at UCLA Medical Center.

The “Mean Girls” star was sentenced to 90 days in jail and 90 days in a substance abuse treatment center for violating her probation in a 2007 drug case.