By Alexandra Zayas and Demorris A. Lee, 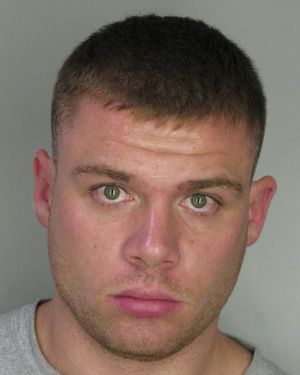 TAMPA — Marine reservist Jasen Bruce was getting clothes out of the trunk of his car Monday evening when a bearded man in a robe approached him.

What the priest got instead, police say, was a tire iron to the head. Then he was chased for three blocks and pinned to the ground — as the Marine kept a 911 operator on the phone, saying he had captured a terrorist.

The man tried to rob him.

The man grabbed Bruce’s crotch and made an overt sexual advance in perfect English.

“That’s what they tell you right before they blow you up,” police say Bruce told them.

Bruce ended up in jail, accused of aggravated battery with a deadly weapon. He was released Tuesday on $7,500 bail. Marakis ended up at the hospital with stitches. He told the police he didn’t want to press charges, espousing biblical forgiveness.

The two men are a year apart in age, and a world apart in life experiences.

Father Michael Eaccarino of St. Nicholas Greek Orthodox Cathedral in Tarpon Springs says Marakis, 29, entered a Greek monastery as a teenager and became a priest nine years ago. He is studying theology at Holy Cross, a Greek Orthodox school in Massachusetts, and traveled to Tarpon Springs two months ago to work on his master’s thesis. He has taken a vow of celibacy.

Eaccarino says the visiting priest got lost Monday after ministering to the elderly in a nursing home.

Jasen Bruce, 28, enlisted as a reserve Marine as a teenager, was discharged honorably when he finished his contract, and enlisted again this March. He has never been deployed to Iraq or Afghanistan, a Marine Corps spokesman said. He got married last month in full dress uniform.

Bruce is a sales manager for APS Pharmacy in Palm Harbor. His blog entries tout the benefits of increasing testosterone and human growth hormones. He was charged with misdemeanor battery in 2007 for hopping over the bed of a tow truck and shoving its driver. He pleaded no contest.

“You see a very short, small man running, and an enormous, large muscular man chasing after him.”

The priest’s GPS gave him the wrong directions, leading him off Interstate 275 and into downtown Tampa. He followed a line of cars into a garage at the Seaport Channelside condominium to ask for help.

He found Bruce, whose back was turned, bending over the trunk of his car, and he tapped his shoulder before saying, in broken English, “please” and “help.”

That’s when Bruce reached for the tire iron. Police say that by the end of the chase, he had hit the priest four times.

Hours after his release from Orient Road Jail on Tuesday, Bruce stood silently as his attorney, Jeff Brown, told his version:

The bearded man wearing a robe and sandals was clearly trespassing in the garage. In a sudden move, the stranger made a verbal sexual advance and grabbed Bruce’s genitals. The Marine defended himself. And immediately, he called 911 as he chased him.

Brown said the police initially called the Marine a “hero” and said the priest was “mentally ill.”

He called the police’s account “one-sided” and said the department should investigate a sergeant he said made derogatory comments about the Marine’s military background.

Police said that sergeant is, himself, a veteran. They say that the priest was disoriented when they found him at the corner of Madison and Meridian avenues, but a translator at Tampa General Hospital helped him communicate. And that the GPS corroborates the priest’s story.

When police arrived at Bruce’s apartment at 1:30 a.m., before they had mentioned charges, he had already called an attorney.

Television news stations showed the priest’s photo on Tuesday and mentioned what the Marine said he did. If the priest had watched, he wouldn’t have understood it.

He’d spent the day in great spirits, his fellow priest said. His main worry was that he inconvenienced the others who had to care for him. Then, a man named Jerry Theophilopoulos got in touch with him. He’s a lawyer, speaks Greek and served as a former board member of the church. The lawyer said he told the priest what the Marine said. Marakis was stunned. His eyes grew wide. He said it was a lie.