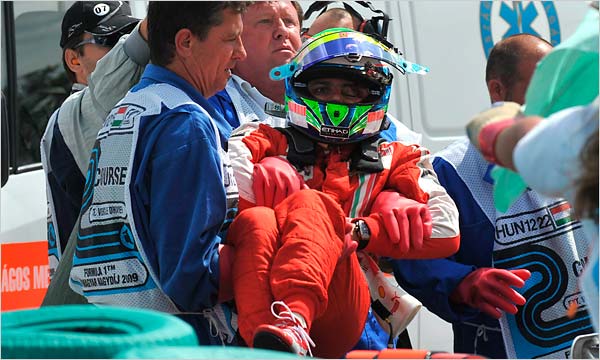 BUDAPEST — Felipe Massa, a Brazilian driver who finished second in the Formula One series last year, was in stable condition Sunday after surgery for a skull fracture, his Ferrari team said.

The Brazilian was injured Saturday in a qualifying session for the Hungarian Grand Prix when a spring from another driver’s car struck his head while he was driving at more than 250 kilometers, or 156 miles, an hour.

Massa, 28, was taken to the AEK Hospital in Budapest by helicopter, where he was found to have suffered damage to his skull and a concussion. Although he was conscious upon arrival at the hospital, doctors placed him in an artificial coma and operated to repair the bone.

“Massa’s condition remains stable and there were no further complications through the night,” the Ferrari team said in a statement Sunday. “He will be given another CT scan today.”

The accident happened less than a week after Henry Surtees, 18, a Formula 2 driver and son of a former world champion for Ferrari, John Surtees, was killed at a race in England when a wheel that had come off another car struck him in the head, killing him.

Formula One officials said that they would look into whether any further safety measures may be taken, like putting canopies over the drivers’ heads.

Massa’s accident occurred during the second part of the qualifying session. His onboard television camera showed the car going down the track at speed, then straight off into a tire wall, where Massa remained motionless.

In slow motion, the footage showed a wheel spring that had come off the Brawn car of Rubens Barrichello, another Brazilian driver, had bounced down the track and hit the front of Massa’s car before smashing into his helmet. The Brawn car was about four seconds ahead of Massa’s Ferrari at the time.

Ross Brawn, the owner and director of the team, said the spring weighed about 700 to 800 grams, or about 1.5 pounds. He said the team would look into why it had come off.

Formula One cars have open cockpits, which leave the drivers’ heads exposed. The last death of a driver in a race was that of another Brazilian, Ayrton Senna, at Imola in 1994. He was struck in the head by part of his own car’s front suspension during an accident.

Formula One later raised the height of the car body around the drivers’ heads, but the front and top of the helmet remain exposed.

Brawn found a positive element, saying he thought Massa had survived largely because of advances in helmet technology. The front of the top part of Massa’s helmet was damaged, but the whole structure remained intact.

Massa began racing in Formula One in 2002 with Sauber. He joined Ferrari in 2006. Last year he was edged out of the title by Lewis Hamilton in the final race.