Why is ABC News Chief White House Correspondent Jake Tapper Such a Complete and Utter Tool ? 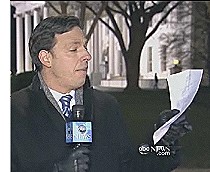 Last week, in an appalling show of corporate greed, “a small group of speculators” sank the Obama administration’s proposed Chrysler deal for just “an extra fifteen cents on the dollar.” The selfish greed of the hedge funds may, however, have produced a good result by forcing Chrysler into the bankruptcy process. The New York Times reported on Friday, “whatever the outcome, this bit of brinkmanship — which many characterized as a game of chicken with Washington — has become yet another public relations disaster for Wall Street.” But instead, this story of corporate greed has now been turned into a right-wing attack on President Obama. Here’s how it happened in three simple steps.

Step 1: Right-Wing Radio Gives Corporate Hedge Funds A Venue To Attack Obama In an interview with Detroit-based conservative talk show host Frank Beckmann on Friday, Tom Lauria — a corporate lawyer representing the hedge funds calling themselves the Committee of Chrysler Non-Tarp Lenders — alleged that one of its members, the investment firm Perella Weinberg, was “directly threatened by the White House” if it did not cooperate with the Obama’s administration’s rescue plan. (Perella was Rahm Emanuel’s former investment partner.) Lauria claimed that Perella withdrew its opposition to the government deal because the White House threatened “that the full force of the White House press corps would destroy its reputation if it continued to fight.” (Listen here.)

Step 2: Right-Wing Pressures White House Reporters To Take Up Its Attack After the story was cooked up by right-wing hate radio, it was peddled to members of the White House press corps, at least one of whom took the bait. On his radio show on Friday, right-wing talker Mark Levin discussed Lauria’s claims against Obama, and then called on his listeners to pressure the White House press corps — specifically ABC’s Jake Tapper — to report the story:

Levin works for the ABC Radio Networks. Tapper works for ABC News. Step 3: ABC’s Jake Tapper Picks It Up, Drudge Promotes It A day after Levin’s show aired, ABC’s White House correspondent Jake Tapper gave the right-wing attacks the platform they were looking for. Tapper reported, “A leading bankruptcy attorney representing hedge funds and money managers told ABC News Saturday that Steve Rattner, the leader of the Obama administration’s Auto Industry Task Force, threatened one of the firms.” After Tapper reported it, Drudge linked to his story and helped give it further amplification:

Both the White House and Perella Weinberg have released statements to ABC News denying the accusations made by Tom Lauria and the right-wing echo chamber. Bottom line: the right wing has morphed a story of corporate greed into a false political attack against Obama.