Experts Are Bewitched, Bewildered and Befuddled By The Economy

Detroit automakers are in line behind governors who are in line behind banks, seeking emergency aid from Washington. Nearly $8 trillion in federal commitments is already out the door, and half of the $700 billion October rescue package has been spent. The economic downturn is accelerating. And nobody is really in charge.

Among a lame-duck Bush administration, a lame-duck Congress, and a president-elect, Barack Obama, who has no legal authority to act and is reluctant to get entangled with the Bush team, Washington’s political vacuum has left policy adrift at the most critical economic period in a generation. 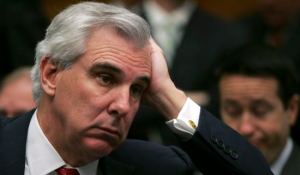 Three of the most storied companies in U.S. economic history – General Motors, Chrysler and Ford – face possible bankruptcy. With GM threatening to topple by the end of this month, House Speaker Nancy Pelosi reached a compromise with the Bush administration on a temporary loan for less than half the $34 billion the automakers wanted. It is aimed at keeping GM and Chrysler alive until the Obama administration takes office. Ford said it could survive without loans so long as the other car makers avoid bankruptcies that would disrupt shared supply chains.

Horrendous job losses in November – 533,000, not including 422,000 who left the workforce – exceeded the gloomiest forecasts. Economists warn that failures in Detroit will intensify the contraction, but at the same time say $34 billion in emergency loans may not save the automakers anyway.

Nobody in Washington wants the automakers to fail, fearing the fallout on the rest of the economy, which is now in the kind of decline that no one under 30 has ever experienced.

“The economy is now locked in a vicious downward spiral,” wrote Nigel Gault, chief economist of economic forecaster IHS Global Insight. The problems have spread globally, greatly magnifying the danger of a long and painful downturn.

A big part of the problem is that no one really knows what to do.

“The world is dealing with an unprecedented series of economic events,” said Joseph Grundfest, a professor of law and business at Stanford University and co-director of the Rock Center on Corporate Governance. “Anybody who stands up and says, ‘Look, this is what you should be doing,’ not only lacks humility, but also lacks a real appreciation of the intellectual difficulty of these circumstances. Because if the answer was so clearly obvious, everybody would have it.”

Pelosi backed off her insistence that the Bush administration bail out the automakers from the $700 billion bank rescue fund, agreeing to tap $25 billion already allocated to the automakers to build green cars. The first $350 billion of the bank fund is almost gone. Congress would have to vote to release the second half, and both parties are so furious with the way the administration has handled the bank rescue that they have warned Treasury Secretary Henry Paulson not to bother asking for more.

“I am through with giving this crowd money to play with,” Senate Banking Committee chairman Chris Dodd, D-Conn., said Thursday, a sentiment echoed by House Republican leader John Boehner.

President Bush, engaged mainly in a series of retrospective speeches and interviews on his legacy, nonetheless forced Pelosi to back off the bank fund Friday. After years of fighting Detroit on fuel-economy standards, Pelosi had resisted using money intended to retool the automakers. Bush said he was worried about giving tax dollars to “companies that may not survive.” Commerce Secretary Carlos Gutierrez warned that allowing Detroit to tap the bank rescue fund would only invite other industries to do the same.

As Congress plunged through two days of inconclusive hearings on Detroit, Obama remained noncommittal. His “one-president-at-a-time” line so irked House Financial Services chairman Barney Frank, D-Mass., that he let loose one of his signature retorts: “I’m afraid that overstates the number of presidents we have,” Frank said. Obama has “got to remedy that situation.”

Obama responded with a presidential-style radio address Saturday, promising the biggest public investment in infrastructure since the federal interstate highways were built in the 1950s, along with all-out efforts to retrofit public buildings for energy efficiency, modernize school buildings, and expand broadband networks, including helping doctors and hospitals switch to electronic medical records. All are part of a huge fiscal stimulus program, with more to come, that he promised would create 2.5 million jobs and save money over the long haul.

“We won’t just throw money at the problem,” Obama said. “We’ll measure progress by the reforms we make and the results we achieve – by the jobs we create, by the energy we save, by whether America is more competitive in the world.”

The colossal bank bailouts, and the way Paulson has managed them, have rendered Paulson effectively powerless. Both parties, under his dire urgings and at great political peril, passed the unpopular $700 billion bank rescue a month before the election. Paulson told them he had a plan. Now they feel betrayed.

Paulson has run through $350 billion veering from one strategy to another. The money may indeed have prevented a banking collapse, but it has not unglued credit markets as much as expected. His rescue of banking giant Citigroup came under fire for its lack of transparency, generous terms and taxpayer assumption of close to $300 billion in debt.

“The value of these measures thus far has been to stave off a total meltdown, which we flirted with,” said Robert Shapiro, former undersecretary of commerce for economic affairs in the Clinton administration and now head of Democratic think tank and advocacy group NDN’s globalization initiative. Shapiro argued, however, as do many Democrats, that Paulson has failed to tackle the underlying problem of housing foreclosures that is causing banks to rein in lending.

Nor has the administration explained to the public the difference between bailing out banks and bailing out automakers, said Bruce Bartlett, a former Treasury official in the George H.W. Bush administration. That has led to confusion about why anyone is getting bailed out.

In addition, “the theory underlying the bailout has changed over time,” Bartlett said. “The $700 billion number appears to have been picked out of thin air. I never saw a rationale for it.”

The Fed has taken further radical steps to inject liquidity into the banking system and guarantee loans, $8 trillion worth by some estimates. Presumably not all the assets it has backed will sour.

The markets have judged some steps effective, Grundfest said. These include buying mortgage debt from Fannie Mae and Freddie Mac, which lowered mortgage interest rates; injecting capital into banks, which prevented them from imploding; and backstopping federal money market funds to stop a panic.

The consequences include widening recession, unemployment and foreclosures.

“Part of the unfortunate reality is that if real estate prices are going to re-equilibrate to a lower level that is significantly lower than the peak, it is mathematically impossible to have that happen without having homeowners and lenders lose a lot of wealth,” Grundfest said. “To the extent that people think government policy can prevent that from happening, the only way you can do that is by having the government say, ‘OK, you lenders and homeowners, you won’t lose the wealth, we the government will lose the wealth.’ And that means that all the rest of us will lose the wealth. But the wealth will be lost.”

Why banks are different from automakers

There is little disagreement that the failure of the Detroit automakers would pose a heavy burden on the economy as autoworkers lose their jobs and suppliers, auto dealerships and other businesses supported by the automakers fail. But these are different from the systemic effects of a widespread banking panic on the whole economy.

Banks loan out far more money than they keep in deposits, roughly $9 in loans for every $1 in deposits. This is what some describe as an intentional house of cards. The system works fine in normal times to expand credit to consumers and businesses.

But if confidence in a bank collapses, and all the depositors demand their money at the same time, even a healthy bank will inevitably fail. This is known as a bank run, made famous in the Jimmy Stewart movie “It’s a Wonderful Life,” often shown at Christmas.

When there is a general collapse in confidence, and depositors rush to draw their money out of many banks at the same time, the entire financial system can fail. As depositors demand their money, banks call in their loans and sell their assets, and yet still cannot pay all their depositors.

Asset values are driven to fire-sale prices. Credit shrinks dramatically. The contraction is every bit as powerful as the expansion of credit that occurred when the bank initially leveraged its deposits into a much larger 9-to-1 portfolio of loans. This reverse process is known as “de-leveraging.”

When this happens to many banks at the same time, as happened in the Great Depression, the credit contraction can bring down the rest of the economy.

The U.S. financial system came quite close to a 1929 abyss in mid-September, which led Congress to pass a $700 billion rescue plan. Even so, bank credit remains sharply constricted and asset prices depressed.

After the Great Depression, the federal government put in place the Federal Deposit Insurance Corp. to protect depositors in a bank run and prevent panic from developing in the first place. (In the current crisis, the FDIC raised its protection level from $100,000 to $250,000 in deposits.)